My love to you, Carol Burnett

Grace: A Child's Intimate Journey Through Cancer And Recovery

Yesterday, Mom and I traveled to Santa Barbara to help the Teddy Bear Cancer Foundation sell raffle tickets for their Fall Fundraiser at the Lobero Theater.  Mom and I worked as a team;  I became quite bold in asking people if they would like to purchase raffle tickets! I believe I even cracked the “toughest nut” there! If you are scratching your head and wondering why the Lobero Theater sounds like a familiar name, it is because it is the same Lobero Theater I write about in Grace … the pageant location.

It was one of those spectacular Santa Barbara days when the ocean sparkled while the majestic mountains gazed loving down upon the brilliant expanse. For as long as I have known about Teddy Bear Cancer Foundation, they have always had a Fall Luncheon for their big fundraiser. This year was different. This year, Teddy Bear planned an evening of comedy to honor Carol Burnett.

Now, I need to give you a little background. My mom is one of those rare people who are never excited about celebrities. Her “celebrities” are children with cancer and those who help them. But—when she heard that Teddy Bear was honoring Carol Burnett, she lit up like a Christmas tree and began bubbling over with joy and laughter. She told me all about Carol’s show that she watched growing up and how Carol’s humor is like no others. My mom absolutely loves Carol Burnett!

When the big screen dropped down across the stage last night, and clips from Carol’s show began playing, I saw exactly what Mom was talking about. When Carol stepped to the podium to speak, I felt exactly what Mom had spoken of. Carol’s heart is huge. I say this not just because she helped Teddy Bear raise a lot of money to help families in need, but because she has a genuine love for her fellow humans. Something tells me this is why Carol’s humor is the absolute best ever, because of her tremendous care for those around her.

I learned something else about Carol last night. Carol lost her daughter, Carrie, to cancer.

It must have been very difficult for her to be there last night. I am grateful– extremely grateful– to Carol Burnett. I know firsthand how vital it is for us to support foundations like Teddy Bear. They helped save my life when I was imprisoned in the darkest pit imaginable. With their help, I received the help I needed to heal.

Carol… you have my love and deep respect forever. 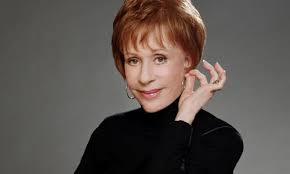 Laughter is outstanding medicine for life!

Let There Be Grace