Today, April 10th, is National Siblings Day. This annual celebration honors the relationships of brothers and sisters. Although Siblings Day is not recognized federally like Father’s Day and Mother’s Day, 39 of our states have official proclamations recognizing Siblings Day. Claudia Evart created the concept for the holiday in 1997, to honor the memory of her sister and brother.

Siblings of kids with cancer have an enormous burden upon them. They live with fear of losing their brother or sister. They watch their sibling suffer in ways that children should never have to witness. They step to the background so their parents can attend to life-threatening issues and provide care  that steals all of their time. They continue with their so-called “normal” life while their sibling and at least one parent are away at the hospital. They try their best to bring joy to their family when their family is falling apart. They sit with their ill sibling just to be with them. To any sick child, this is the greatest of all gifts… time. These kids are SUPER!

Today, Alex’s Lemonade Stand announced it will be working with the organization SuperSibs! in the near future, to provide support for siblings of children fighting cancer.

“ALSF is going to join forces SuperSibs!, an organization that has worked to support siblings of children with cancer since 2002. SuperSibs! was established when Melanie Goldish’s older son was diagnosed with leukemia, and she was unable to find support services as her younger son struggled to cope. Goldish hoped to fill that void, creating SuperSibs! to focus on the well-being of siblings who may experience fear and isolation as their brother or sister fights childhood cancer.”

To view this new program on their website: www.AlexsLemonade.org/supersibs

Today on Twitter, Beads of Courage tweeted a photo of their Sibling Program Guide for kids at Phoenix Children’s Hospital. 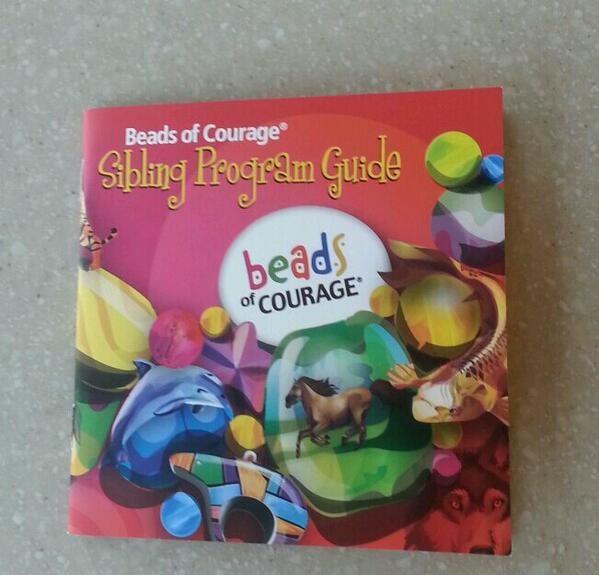 Tweet: “This is the Sibling Program Guide for kids at @PhxChildrens with a brother or sister in the @beadsofcourage program.”

What a great surprise to find that someone knows about Beads of Courage!  For those of you who have never heard of them, I would love to share my story.  Maybe someone will be inspired to give $25 to Beads of Courage– so that a child who is very ill will feel like I did when I received mine.

From Grace: A Child’s Intimate Journey Through Cancer and Recovery:

Just as I was beginning to sense the “chemo” feeling once again, luckily, I had another distraction.  Robyn entered with a large plastic box and a paper cup.  I was curious and intrigued as she plunked down table side, right next to me.

Printed on the box, in huge, colorful letters, was Beads of Courage.  Her short hair bobbed up and down excitedly, as she told me all about it.  The Beads are for cancer kids to create a necklace by stringing together different colored beads that represent pokes, operations, ER trips, etc.  She placed a long string in the paper cup, and then I began to make my selections.

Slowly reaching for the bright green beads, I dropped them, one by one, into my cup– they were for tests.  Next, I received white beads for days of chemo and yellow ones for days in the hospital.  I added the pretty dark blue beads, as they too joined the others.  They were for clinic visits.  Lastly, I acquired an orange bead for my PICC line, four tan ones for my biopsies and bone marrow aspiration, and black beads for pokes.  As black began to drown out the other colors in the pile, I realized just how much of a pin cushion I had become.  I already had quite a collection and began carefully threading them onto my big long string.  Reaching for the letter beads, I spelled out my name before looping and adding the rest.  Wow.  It was already nearly half full, and I then knew why Robyn had given me such a long string.

My necklace is a symbol of what I had done and what I would do.  I felt proud as it rested around my neck, each one of those beads telling a different story, a separate struggle and an eventual triumph.  It might be just a little necklace, but it means something so much deeper to me.

Would you like to encourage a child who is very ill?  I enCourage you to visit www.beadsofcourage.org

ARCs Ready at the Printer and Beads of Courage

This week has been a bit crazy with late night dance rehearsals for shows that start tonight!  I’m not sure if I can fit all of this excitement inside of Melinda!  Besides dancing all day to get ready for the performance tonight, I heard from Jenn at Greenleaf… and she said…

ARCs of Grace: A Child’s Intimate Journey Through Cancer and Recovery are ready at the printer!  Yes– READY!

It looks like I will be able to hold one in my hands before I turn sixteen.  What a birthday present!

Did anyone notice that the spaceshuttle Atlantis carried Beads of Courage this time?  Do you know what Beads of Courage are?  I will tell you tomorrow if you don’t look it up yourself first!