While I was in Boston on the Children’s Hospital Hope Tour, I got to meet someone I have come to admire… someone close to my age… someone who not only advocates for children with cancer, but someone who is studying to become a pediatric oncologist. This beautiful person’s name is Khadi and Mom and I met her at Boston Children’s Hospital. I learned about Khadi and the non-profit organization she started called Hope for Kids Cancer through Facebook.

I was happy to discover that Khadi was up for adventure as we wandered the basement halls and past loading docks, looking for their Family Resource Center. After asking several locals if they would be our GPS, we not only found it, but we had the chance to meet one of the nicest people we met on our trip, Kate Simonelli.  We left a book with her and snapped a couple of photos before we left for more discoveries. 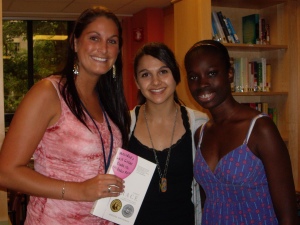 With Kate and Khadi at Boston Children's Hospital

We were able to find Dana Farber Resource Center, thanks to a kind police officer who pointed us in the right direction (you can see we were directionally challenged!) I did not know this story at the time, but learned of it a few nights later from the emergency room staff at Lawrence Memorial Hospital…

When Dana Farber was constructing a new building across the street from their old building, the construction workers could see childhood cancer patients through the windows of the old building. A game began where children would hold up signs with their names on them and construction workers would write the child’s name in spray paint on the steel construction beams of the new building. Sometimes, children would hold up signs that read, “Go Red Sox!” Whatever was on their signs became permanently written on the frame of the new building. Workers could be seen wiping away their tears as they would finish their name spray painting.