Support for Noah’s Light Foundation and the NOAH Protocol 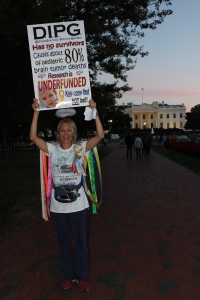 The Founder of Noah’s Light Foundation, Amber Larkin, received notification on October 23, 2014 that the Food and Drug Administration granted The University of Texas MD Anderson Cancer Center approval for a new pediatric cancer treatment developed to treat pediatric brain cancer, called the NOAH Protocol. This is remarkable and thrilling, offering new hope for groundbreaking results that have eluded researchers for three decades. For some horridly aggressive types of childhood cancer diagnoses that have a 0% survival rate, this is the best Halloween “treat” that could ever be created!

“Noah was diagnosed just before Halloween trick-or-treating, and it’s only fitting that we’ve received FDA approval to begin testing this month. Long before I lost my son to cancer, I knew that there had to be better treatments through personalized cell therapy – using your own immune system to help fight the cancer. His illness has defined the rest of my life. There are so many more ‘Noahs’ out there, and I now do this for each and every one. My wish is that the NOAH Protocol becomes a catalyst for the cure for all cancers.” ~Amber Larkin

The NOAH Protocol was named after Amber Larkin’s son, Noah, who fought medulloblastoma and died in 2012 when he was just eight years old. Ever since, his lovingly determined mom, Amber, has been on a mission to create hope and change for all children diagnosed with pediatric brain cancer. NOAH stands for New Opportunity Advancing Hope. For children battling childhood cancer, there is no greater hope than a possible cure. For survivors of childhood cancer, there is no greater hope than less toxic treatments which will both heal and preserve their future health. The sound of “Immunotherapy” instead of “Chemotherapy” is like a hymn sent straight from heaven!

“The NOAH Protocol (NewOpportunity AdvancingHope) is groundbreaking, advanced immunotherapy to treat children diagnosed with brain cancer. Until this treatment, chemotherapy had to be administered in extremely high doses to the entire system so that it could breach the blood-brain barrier, a protective layer that surrounds the brain. Radiation is aimed at the entire brain, damaging healthy cells in the process and rendering younger patients who survive unable to read, tell time or tie their shoes.”

Knowing that this treatment will treat cancer at the tumor site, without toxic chemotherapy and radiation, makes me fill up with tremendous hope for the future of our children’s health. Imagine…

Oncologists will use patients’ own cells, cells called NK, or natural killer cells, to fight their tumors. A unique surgical technique implants these cells directly through a port at the cancer location. The Killer Cells then do the job they are trained for; they kill cancer.

It is not surprising to me to learn that this huge step forward is due in large part to the love of a mother for her son. Brains and research funding are vital components for moving forward for cures for all children with cancer, but love will always be the driving force that binds everything together for great advances. Without love, data is simply data.

Without love, this fantastic new hope for treating pediatric brain cancer would not even exist.

Don’t you just love the love of a mom?

You can support Amber Larkin’s mission by voting daily for her to receive the BJFH Award of $100,000 for Noah’s Light Foundation.

Way to Yell, Kick, Click and Scream– I am SO Stinkin’ Proud of You!

I want to get down on my knees and thank each and every one of you who yelled, kicked, clicked and screamed about the shortage of the drug methotrexate. According to PAC2, who I must continually thank for uniting us and educating us, “the methotrexate crisis is averted”! The childhood cancer community has come together in these past few weeks, with a voice that has been heard! Like I said in the title to this post, “I am SO stinkin’ proud of you!”

This news came today from a FDA webinar:

2)    Manufacturing at Hospira has increased earlier than expected

“We now have sufficient available supplies and will continue to see more in weeks to come.”

Further updates will come, as there are other potential drug shortages on the horizon.

I send a huge thank you to Dr. Adamson from CHOP, for leading us in the legislative battles that loom around and about childhood cancer. Your leadership truly blesses us. Please keep doing what you are doing… saving children’s lives. You help give clarity to the issues for those of us who want to learn what we can do to help stop childhood cancer.

Finally, I’m thinking that Dr. Adamson must be a pretty fun guy to hang out with. (I see all of you laughing!) Anyone with a sense of humor, (direct and to the point) like the one he shows below, has got to be okay!

In the quote below, it appears that Dr. Adamson challenges Congress to complete passing this legislation in the same it takes for him to get children with ALL into remission. He is not joking.

What a beautiful girl she is!

Let’s continue our fight for her and for all the other children fighting.

We are with you Emma Grace-- all the way!

Way to Yell, Kick, Click and Scream my friends!

It is clearly apparent that somebody cares. Nice work.